INNOVATIVE TOOLS AND PRODUCTS THAT HELP YOU MAINTAIN AND REPAIR MOTORCYCLES, ATVS AND UTVS

Bleeding brakes is a job that is not a whole lot of fun, and can be very messy and potentially destructive, if you get brake fluid on your nice paint job. Because of this, this job sometimes gets neglected, which is not a good thing at all. Your brakes are perhaps the most important component on your bike in terms of safety and control. 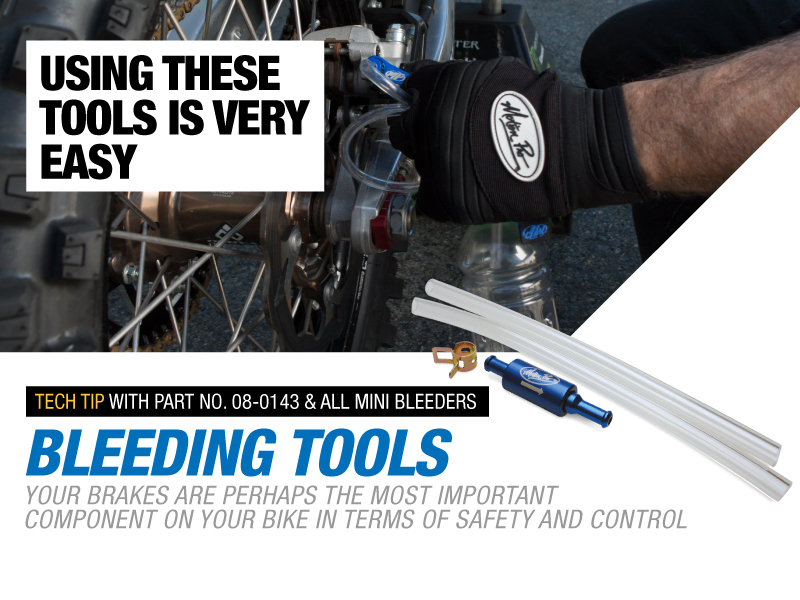 Aside from having enough pad material in the calipers, the brake fluid and its condition is the most important part of your brake system. Without going into a lot of technical details, heat and time will reduce the performance of the fluid. One of the most detrimental aspects is that most brake fluids attract water, which is quickly absorbed into the fluid, and has a much lower boiling point than the fluid itself. If enough water gets into the fluid, and you get it hot enough, the water will boil, introducing gas pockets into your hydraulic system, and resulting in your brake lever heading straight to the handlebar, a bad deal in any situation.

Flushing and bleeding your brake system regularly will avoid this very dangerous problem. In the past, bleeding or flushing brakes meant juggling wrenches, hoses, waste brake fluid bottles, clean up rags, etc. Motion Pro has several hydraulic bleeding tools, including the Mini Bleeder, a tool that incorporates many different bleeding tools in one compact package.

For a simple, general use bleeding tool that will function with virtually any hydraulic system on a motorcycle or ATV, look no farther than the Hydraulic Brake Bleeder (part# 08-0143). This is a one way check valve tool that will simplify the bleeding process, and allow faster fluid flushing in an existing system. 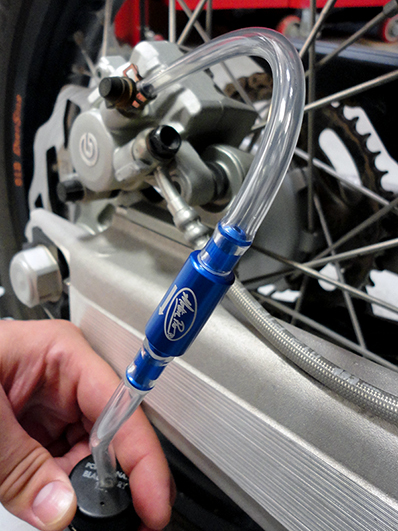 The Mini Bleeder is a size specific tool that comes in 8mm (part# 08-0482), 10mm (part# 08-0529), 11mm (part# 08-0530) and 3/8” (part# 08-0543) sizes, and fits easily over a bleed screw with an interior rubber seal to seal around the nipple of the bleed screw. The built-in floating wrench handle features 12 points on a 6-point hex on the tool body, making the handle micro adjustable for position on the body, allowing it to be used in super tight spaces without having to remove the tool from the bleed nipple. The short length of the handle reduces the chance of over tightening the bleed screw. There is a one way check valve inside the body of the tool, greatly reducing fluid spillage when removing the tool from the bleed screw, and also allowing fast fluid flushing when desired. 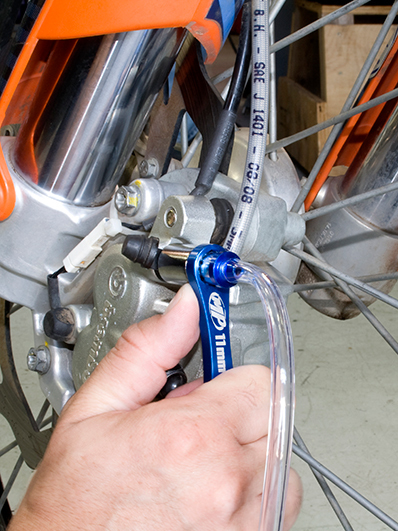 Using these tools is very simple. The outlet hose from any of these tools should be routed to a brake fluid catch bottle. In the case of the Mini Bleeder you simply connect it to the bleed screw, and start bleeding. You can perform the job in two ways, standard bleeding, where you build pressure in the closed system by stroking the brake lever, then open the bleed screw to allow fluid and air to flow out, and then closing the bleed screw before releasing the brake lever. This method is best for removing air from the system as a final process. The alternate method is to use the Mini Bleeder as a flushing tool, simply opening the bleed screw and leaving it open while pumping the brake lever to flush the fluid through the system. The check valve in the Mini Bleeder body will keep the fluid flowing out only, and all you have to do is keep the reservoir filled until the fluid runs clean out of the Mini Bleeder. Then finish off the job with the standard bleeding method to remove any left over air, and you are ready to go. As you remove the Mini Bleeder, there will be a tiny amount of fluid left in the bleeder, so keep a small rag handy, but it is a much cleaner job than just a hose and a wrench!

Note: The Hydraulic Brake Bleeder (part# 08-0143) will also require the use of an appropriate size wrench to open and close the bleed screw on the brake. Other than that, the function is the same.